The 2015 NGA Awards for Outstanding Governance

Yesterday the National Governors’ Association held its annual awards ceremony in recognition of those who have been judged to be outstanding in school governance. The awards recognise exceptional governing and trust boards from schools and academies as well as the clerks who perform a critical, but often little-appreciated and understood role in supporting school governors.

The NGA Awards ceremony took place on the Terrace of the Houses of Parliament overlooking the Thames and was hosted by Neil Carmichael MP, who restated his intention to run for the vacant position of Chair of the Education Select Committee recently vacated by Graham Stuart and also that he intended to proceed with his previously tabled private member’s Bill on school governance:

Originally scheduled to be presented by the Secretary of State for Education, it was instead the Shadow Secretary of State, Tristram Hunt MP, who was present to lend his support to the role of good governance in schools – drawing attention to and similarities with the critical role that good clerking plays in effective school governance and the day-to-day political life of Westminster. He also gave his support to Neil Carmichael’s bid to be chair of the Education Select Committe and was unequivocal in his opinion of the importance of governors in a changing school environment:

.@TristramHuntMP – governors are guardians of the schools. Your role in school ecology is enormously important #NGAawards

Outstanding Clerk to a Governing Board 2015 – the finalists

Four clerks – two from Wales, two from England – were nominated for the NGA Outstanding Clerk to a Governing Board award:

All four were presented with their awards – with Sally Coulter and David Walker announced as joint winners overall. You can read the background citations of all four nominees on the NGA web site (PDF) but it’s helpful to share those of the winners here (emphasis added): 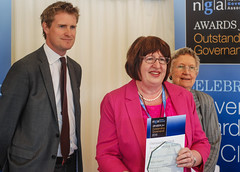 “Sally takes a clear role in the management, development and implementation of governance and the governing board. She has a strong focus on the strategic role and function of the governing board, enabling governors to concentrate on their core function. Sally provides a great support to the chair, ensuring that the governing board is driven by the school improvement agenda. She is proactive and provides appropriate support, information and guidance where required, drawing upon her in-depth and comprehensive knowledge and understanding of governance and the wider educational landscape. She keeps herself well informed and up to date.” 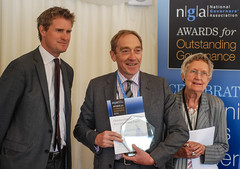 Outstanding Governing Board Award – the finalists

The second award is for an Outstanding Governing Board in England, who by its good governance has increased opportunities for achievement by their children and young people. The part played by the governing board in achieving that had to be demonstrated.

with the governing board of Churchill Community College being announced as the overall winners. Again, please read all of the finalists’ citations on the NGA website, but it’s worth including Churchill’s here:

The governing board from Churchill Community College from Newcastle is the overall winner of the #NGAawards pic.twitter.com/lj76Hjsaph

“The school has progressed from ‘satisfactory’ to ‘good’ to ‘outstanding’ in terms of Ofsted inspection and is now a teaching school.
“The breadth of experience and skills of the governing board are wide ranging and their expertise has enabled them to challenge leaders well, holding them to account for the progress made by all. The vision of the college – “excellence for all” – has resulted in an outward-facing school prepared to not only share its experience and knowledge but also continue to learn in the process.
“The college is used by North Tyneside local authority, the North Tyneside Learning Trust and other local authorities to provide support to other schools. The governors are instrumental in enabling school to school support and modelling such good practice by being associate governors elsewhere.”

Closing the event, Laura McInerney from SchoolsWeek confessed that, as a teacher, she’d had an assumption that the newspaper would be for teachers, hear from teachers, and be about teachers – but had been (pleasantly) surprised by the volume of contact from governors. “We often hear complaints that an incoming Secretary of State for Education has never been a teacher” said McInerney, with the Shadow Secretary of State stood almost in her line of sight, “but I’d like to ask any prospective Secretary of State ‘Have you ever been a school governor?’ – that would be a sign of real commitment.”

at the #NGAawards @miss_mcinerney asks: "how many Secretaries of State have been governors?" – that shows commitment pic.twitter.com/CrpUCWLL4a

Congratulations to all of the finalists – and to the volunteer judges, who were clearly inspired by what they saw when they visited governing boards around the country. We’ve a gallery of images from the awards ceremony, including all of the finalists, on Flickr, but before you look at those, why not contemplate which of the following questions you might like to answer at your next full governing board meeting?